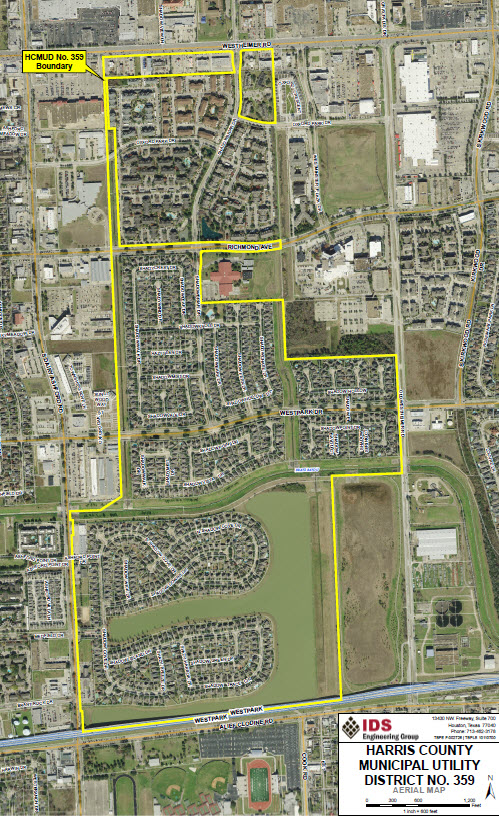 The District is a municipal utility district created by an order of the Commission, effective June 24, 1993, under Article XVI, Section 59 of the Texas Constitution, and operates under the provisions of Chapter 49 and Chapter 54 of the Texas Water Code, as amended, and other general statutes of Texas applicable to municipal utility districts. The District, which lies wholly within the corporate limits of the City of Houston, is subject to the continuing supervisory jurisdiction of the Commission.

The District is empowered, among other things, to finance, purchase, construct, operate and maintain all works, improvements, facilities and plants necessary for the supply and distribution of water; the collection, transportation and treatment of wastewater; and the control and diversion of storm water. The District may issue bonds and other forms of indebtedness to purchase or construct such facilities. The District may also provide solid waste disposal and collection services. The District is also empowered to establish, operate and maintain fire-fighting facilities, separately or jointly or with one or more conservation and reclamation districts, municipalities or other political subdivisions, after approval by the City of Houston, the Commission and the voters of the District. Additionally, the District may, subject to certain limitations, develop and finance recreational facilities and may also, subject to the granting of road powers by the Commission and certain limitations, develop and finance roads.

The District is required to observe certain requirements of the City of Houston which limit the purposes for which the District may sell bonds to finance the acquisition, construction, and improvement of waterworks, wastewater, drainage, recreational, road and fire-fighting facilities and the refunding of outstanding debt obligations; limit the net effective interest rate on such bonds and other terms of such bonds; require approval by the City of Houston of District construction plans; and permit connections only to lots and reserves described in a plat that has been approved by the City of Houston and filed in the real property records of Harris County. Construction and operation of the District’s drainage system is subject to the regulatory jurisdiction of additional State of Texas and local agencies.

In addition to the development described above, the District has approximately 3.8 acres that remain to be developed and approximately 108 acres that are undevelopable, including streets and recreational sites.

The Board generally meets on the first Wednesday of the month at Allen Boone Humphries Robinson LLP, 3200 Southwest Freeway, Houston, Texas 77027.

For persons with questions or needing help regarding website accessibility, or to request the provided information in alternative formats, please call (832) 463-0231.